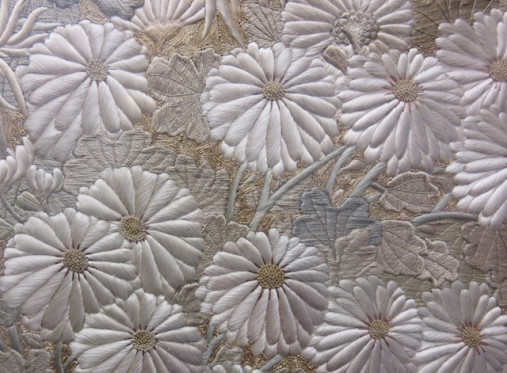 When we look around we often see patterns—in upholstery, wall coverings, and elsewhere.  The effects of visual patterns on how we think and behave have been thoroughly investigated by neuroscientists.

For information on the repercussions of viewing particular colors, read this article.  Coordinating color selections is important and a significant effect on user wellbeing and performance.

Researchers have learned a lot about how symmetry, complexity, line, harmony, balance and other design fundamentals influence human thoughts and behaviors as well as how to best use these design elements in practice, for example, in patterns.

In 1941, Campbell reported that design with visual balance, rhythm, harmony, etc., was judged more positively than design without these attributes (Campbell, 1941).  Subsequent research has confirmed these conclusions.

More than a few years later, in an introduction to neuroaesthetics, Lehrer (2009) reviewed many of the principles of great art, which are also applicable to noteworthy design: “Balance: successful art makes use of its entire representational space, and spreads its information across the entire canvas . . . symmetry: symmetrical things, from human faces to Roman arches, are more attractive than asymmetrical ones; repetition, rhythm, orderliness: beauty is inseparable from the appearance of order. Consider the garden paintings of Monet. Pictures filled with patterns, be it subtle color repetitions or formal rhythms, appear more elegant and composed.”

Visual symmetry, has several forms, reflectional and rotational, for example.  It has repeatedly been linked to positive experiences.

For more information on symmetry, read this article.

Visual complexity is an important driver of experience; individual visual patterns can be more or less complex and the use of surface patterns contributes to the visual complexity of an environment.  Both too much and too little are bad for our mood and cognitive performance.  Cognitive science research reveals how the amount of information we pick up from the world around us influences our mental and physical wellbeing, how to determine how visually complex our world is, and instances in which we must be particularly careful to guard against excessive visual complexity, disorder, and clutter.

By surveying a range of different scenes and items viewed, Nadal, Munar, Marty, and Cela-Conde learned that visual complexity is determined by the number of different elements present, and their organization and symmetry (2010). Scenes with more colors and clutter are generally seen as more complex and more open scenes tend to be categorized as less complex (Oliva, Mack, Shrestha, and Peeper, 2004). As Chaparro and Chaparro report, color can be used to reduce visual clutter when multiple items are the same shade, particularly if those “same-colored” elements are next to each other (2017).

Visual complexity can be measured by experts using sophisticated computer programs and complicated mathematical algorithms.  The most practical way to assess visual complexity, without computers and calculators, is to compare an existing or potential space to one with known visual complexity.

There are clear advantages to viewing scenes/patterns with moderate visual complexity.

For more information on visual complexity, read this article.

Lines can go up or down, or not:

Design elements can be more curvilinear or rectilinear:

Kumar carefully evaluated classic aesthetic concepts including harmony and balance (2016).  Reporting on his findings, Kumar states, “humans are sensitive to balance in visual compositions. . . . imbalance for the sale of imbalance tends to be unappealing. . . . consumers generally prefer harmony to disharmony, even in a composition with a variety of elements.” Harmony increases perceived attractiveness.

As noted earlier, in an Introduction to neuroaesthetics, Lehrer (2009) reviewed principles of great art, his insights are also applicable to design generally: “repetition, rhythm, orderliness: beauty is inseparable from the appearance of order.”

Visual fractals have an important influence on user experience.

Support for the golden ratio is mixed.

Jeon, Han, and Namstudied (2020) evaluated how preferences for particular color vary.  They report that “designers and marketers often use a mix of colors whose harmony must be taken into consideration, which includes choosing whether to use colors placed next to each other on the color wheel (analogous combination) or to combine colors that are opposite each other (complementary combination). . . . Individuals with interdependent [with other people] self-construals tend to focus on relational similarity and value harmony, whereas individuals with independent [apart from other people] self-construals tend to view objects as discrete and disconnected. Accordingly, the authors posited that individuals with interdependent self-construals would be more sensitive to the relationship between two colors and perceive analogous colors as more harmonious, thus preferring brands and products featuring analogous colors to those featuring complementary colors. Contrariwise, individuals with independent self-construals would display indifference in this regard. The hypotheses were confirmed in four studies employing various colors to form analogous and complementary color combinations.”

Serra, Gouaich, and Manav (2022) assessed preferred surface color combinations (2022).  They share that they “explored the similarity/contrast . . . on the walls of a simulated interior of a bedroom from the Swiss Pavilion (Le Corbusier, 1930-1931). Participants were 644 students of architecture and interior design in Western Europe and Near East, who evaluated with a Likert scale their preference for virtual images via an online survey. Results indicate that the most preferred color combinations are those with hues closer in the color wheel, being the similarity between hues in the backgrounds more important than in the accent colors, and with NCS B30G to G as the most preferred hues. Observers preferred color compositions with blackness under 10% and similar blackness between the two background colors, together with a certain blackness contrast between these background colors and the two color accents. Similarly, observers liked color compositions with low chromaticness and low chromaticness difference among the four colors of the composition.”

Seeing surface patterns and sets of colors used together affects how we think and behave in meaningful ways.

To receive EDAC CEUs after reading this article, follow this link:
https://centerforhealthdesign.wufoo.com/forms/rv8kt9k111uyz7/

“Animals Should Use Short, Fast Movements to Avoid Being Located.”  2020.  Press release, University of Bristol, http://www.bristol.ac.uk/news/2020/january/camouflage-.html

Aenne Brielmann, Nir Buras, Nikos Salingaros, and Richard Taylor.  2022. “What Happens In Your Brain When You Walk Down the Street?  Implications of Architectural Proportions, Biophilia, and Fractal Geometry for Urban Science.”  Urban Science, vol. 6, no. 3, https://doi.org/10.3390/urbansci6010003

David Fell.  2010. “Wood in the Human Environment:  Restorative Properties of Wood in the Built Indoor Environment.”  Dissertation, The University of British Columbia.

Jay Friedenberg.  “What Makes Textures Beautiful?  Effects of Shared Orientation.”  Psychology of Aesthetics, Creativity, and the Arts, in press, http://dx.doi.org/10.1037/aca0000349

Yannick Joye, Linda Steg, Ayca Unal, and Roos Pals.  2016. “When Complex is Easy on the Mind:  Internal Repetition of Visual Information in Complex Objects Is a Source of Perceptual Fluency.”  Journal of Experimental Psychology:  Human Perception and Performance, vol. 42, no. 1, pp. 103-114.

I.McManus, Richard Cook, and Amy Hunt.  2010. “Beyond the Golden Section and Normative Aesthetics:  Why Do Individuals Differ So Much In Their Aesthetic Preferences for Rectangles?” Psychology of Aesthetics, Creativity, and the Arts, vol. 4, no. 2, pp. 113-136.

Richard Taylor and Branka Spehar.  2016.  “Fractal Fluency:  An Intimate Relationship Between the Brain and Processing of Fractal Stimuli.”  In A. Di Ieva (ed.) The Fractal Geometry of the Brain, Springer:  New York, pp. 485-496.