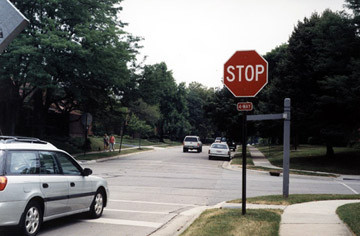 Measures to protect pedestrian safety sometimes seem counter-intuitive. In some situations, marking crosswalks, for example, can increase pedestrian risk, rather than lower it. (See RDC, Spring 2004, pg. 9.) What interventions are effective, and what can we do to reconcile the difference between what is safer, and what we think is safer? An article in the American Journal of Public Health by Richard Retting, Susan Ferguson and Anne McCartt (all at the Insurance Institute for Traffic Safety) reviews studies of traffic-engineering measures to reduce pedestrian injuries, while Robert Schneider, Rhonda Ryznar and Asad Khattak at the University of North Carolina at Chapel Hill investigate the differences between reported pedestrian accidents and perceived dangerous pedestrian sites on that campus.

Decrease Driver Speed
Retting and associates review studies for traffic-engineering interventions designed to reduce pedestrian injuries, classifying the modifications into three categories: measures to reduce vehicle speeds; measures to separate pedestrians and vehicles by time; and measures to reduce pedestrian–vehicle interactions by physical separation. The authors report studies that show placing roundabouts at intersections and using all-way stop signs at intersections can be effective in reducing speed and vehicle crashes with pedestrians. Area-wide traffic-calming measures lower average vehicle speed, but the authors cite conflicting evidence on traffic calming’s record in reducing the number of crashes, with one meta-study showing a 25% decrease, while another found no decrease. Although the authors do not mention it, lower speeds can affect the severity of such incidents if they do occur.

Distance Pedestrian by Timing
Allowing pedestrians time to cross an intersection free of turn traffic is one way to increase pedestrian safety, with one study reporting that this measure decreased the accident rate by half. Increasing the yellow and red phasing of lights to ensure all traffic is clear of the intersection before pedestrians enter the roadway has also been effective, with one study reporting 37% fewer crashes. Automatic pedestrian detection, which starts the walk cycle when a pedestrian is perceived, reduced the number of pedestrians that attempted to cross without the signal, and, thus, pedestrian conflicts with vehicles. This study, though, was limited to four sites without equivalent control sites. Traffic signs and pavement markings that warn pedestrians about crossing dangers also reduced pedestrian risk. In-pavement flashing lights, activated when pedestrians were crossing, reduced risk at some locations in a reported study, but not uniformly.

Separate Pedestrians by Space
Other methods, besides pedestrian overpasses, can increase the distance between drivers and pedestrians. Advance stop lines increased the distance between vehicles waiting to proceed and the pedestrian crosswalk, and also reduced the number of vehicles stopped in the crosswalk. In this study, though, actual vehicle–pedestrian conflicts were not measured. Residential and mixed-use areas had decreased pedestrian accidents where sidewalks were installed. Refuge islands, or places for pedestrians to stop between traffic lanes, were also effective in reducing pedestrian crashes, as were pedestrian barriers preventing mid-block crossings.

Increase Pedestrian Visibility
Crossing a roadway in the dark adds to pedestrian risk, but lighting can reduce nighttime crashes. Since pedestrians, especially children, can be obscured by parked cars, changing or restricting parking should affect the pedestrian accident rate. The authors report a study during which diagonal parking replaced on-street parallel parking, reducing the number of pedestrians entering the roadway, increasing their surveillance of the roadway, and decreasing vehicle speed for passing traffic. Bus stop relocation, where the crossing intersection was to the rear of the bus, rather than in front, limited the number of pedestrians who entered the roadway in front of a bus.

Working Proactively
Researcher Robert Schneider and associates used the university campus at Chapel Hill to investigate what factors might contribute to pedestrian accidents, and to see whether the locations of reported pedestrian–vehicle accidents differed from the perceptions of dangerous crossing sites that the campus population—both drivers and pedestrians—had. They used both GIS and probability modeling based on questionnaires of on-campus drivers and pedestrians to determine their results. Several known risk factors correlated with the campus accident information, including incomplete sidewalks, higher pedestrian volume, and number of marked crosswalks per section.

Marked crosswalks, as previously stated, can increase pedestrian risk in some cases. They also found perceptual differences, which they label “perception mismatch.” In several cases, users correctly identified high-risk areas, but those surveyed thought that crossings near libraries had more risk than they actually did, and they perceived less risk around stadiums and academic buildings than police reports indicated. The researchers posit that students on the way to a game or hurrying to class in an academic building might be less aware than normal of pedestrian dangers, and thus take greater risks. The researchers note that this type of proactive investigation can identify potentially dangerous crossing areas before an accident happens, as well as raise on-campus driver and pedestrian safety awareness during the process of collecting the data for the analysis. As seen from these studies, effective pedestrian safety interventions have to consider known risk factors, pedestrian perceptions, relative cost, and proven solutions.