Designing with Nature to Reduce Crime 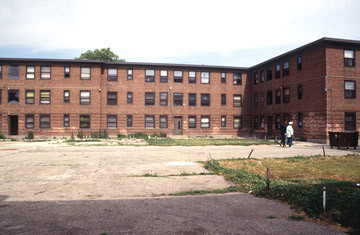 In English legend, the highwayman rides out from behind the cover of trees and threatens honest travelers. This traditional view of nature’s role in promoting wrongdoing is now being re-examined. Two recent studies provide evidence that trees and grass around public housing sites can reduce some aggression and deter crime. Researchers Frances Kuo and William Sullivan (University of Illinois) studied two Chicago public housing sites. At one site, the researchers recruited and trained fellow residents to ask women questions about the amount of violence and aggression (verbal, psychological, and physical) they had engaged in. Another study at a separate complex looked at police reports over a two-year period. 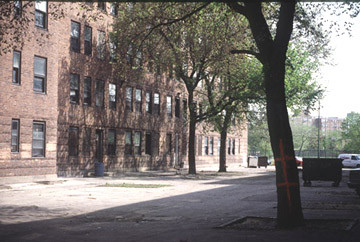 Lower aggression
Using the information from the interviews, the researchers found that the women reported fewer aggressive acts against partners over the last year if residents lived in “green” vs. “barren” surroundings. There was no connection between aggression against their children in the last year and greenness.

The researchers also found less lifetime violence against partners in greener buildings—a finding that may reflect the residents’ long-term occupancy in the same apartment, or a bias toward remembering and reporting more recent events.

Lower Crime
Turning to crime statistics, the researchers looked at two years of crime reports from a large public housing complex. The vegetation around 98 selected buildings was quantified into three levels: low, medium, and high. The crime reports showed that levels of all crimes, including property and violent crimes, were lower in the greener surroundings.

Underlying reasons
The researchers believe that increased vegetation may deter crime by:

Plants that block views and provide hiding places may increase fear and crime, but in these studies, the vegetation was primarily trees and grass. Vegetation can clearly influence aggression and crime, whether committed by legendary English highwaymen or modern lawbreakers.