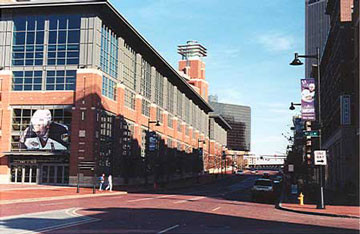 A diversified mix of stores, restaurants, and entertainment venues can draw pedestrians to urban centers and spur further economic development. Creating the initial nucleus for such development, though, is often difficult. Many times, the initial investment proposed is a building—museum, sports facility, or tourist attraction—that would bring people into the area. Researcher Ernest Sternberg, The University at Buffalo, The State University of New York, reviews relevant research on these “catalytic buildings” to see what is known about their effectiveness.

Catalysts and Development
Sernberg enumerates five ways in which a building can influence local development. He believes the primary way is by increasing pedestrian traffic in the area, creating convenient opportunities for pedestrians to visit other establishments. Other relationships can also exist. The building might provide a public amenity, create a more pleasurable locale, or add to an area’s inherent identity or charm, all increasing the neighborhood’s desirability. As a physical testimonial of intent or interest, it might reassure other investors and increase the likelihood of additional development, or its design and siting might influence planners’ and urban visionaries’ ideas about the form and context of future development. Appropriate physical design underlies all these reasons. His article, though, concentrates on what we know about pedestrian behavior, distilling precepts from literature on marketing research and shopping behavior. These precepts are concerned with location, aesthetics, and pedestrian flow. 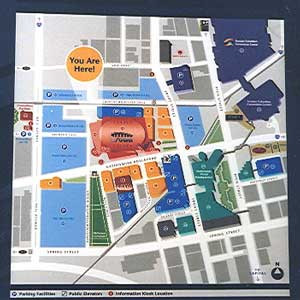 To increase local development, people who visit the catalytic building should have a choice of commercial venues nearby. These stores and attractions should be clustered, and accessible on foot. People enjoy shopping at stores that are close together—to comparison shop, to buy a variety of things conveniently, or to just “window shop.” Previous studies cited by Sternberg indicate that pedestrians are generally motivated to walk up to 700 feet, so distances between the stores and the catalytic building, and between the stores themselves, are important. Within the area, planners should create the essentials that will support a bustling commercial area, such as appropriate land use regulations and lack of nuisances or conflicting land uses. The enterprise area and the catalytic building’s exits and entrances should be designed to capture shoppers before they can escape in their cars to other competing venues. Reviewing mall research, shoppers often make unplanned purchases when in a shopping area—in some cases up to 50% of those present buy something on impulse—so increasing shopping opportunities can increase economic activity.

Aesthetics Important
Pedestrians prefer streets with signs of human activity (see RDC, October 2002, p.1), and shun areas that are boring, or appear to be unsafe. The commercial area itself should be inviting, and Sternberg cautions against designs that require pedestrians to cross a stretch of parking lot or a highway to reach that area. 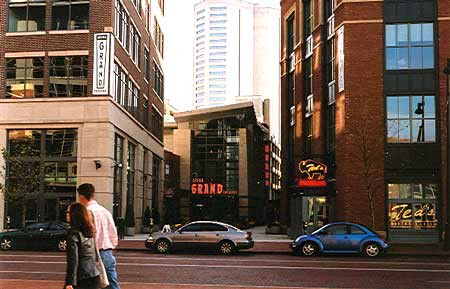 Lively Pedestrian Flow
Pedestrians make an area seem active and engaging, encouraging more people to stay and join in. There is a target range between a street seeming to be deserted and crowded. Drawing from research, Sternberg recommends a pedestrian density of 40 sq. ft. per person as a target. To create an enticing shopping environment, sidewalks have to be designed to create an optimal density for the catalytic building’s outflow crowd.


Design Example
Sternberg provides an example of a street with twenty shops, 500 feet long, between the catalytic building and both parking and transport, with sidewalks twenty feet wide. If the catalytic building discharges up to 2,000 people over several minutes, the street would not be overcrowded, and some percentage of those patrons would stay and visit the other establishments. Predicting a figure of 25%, that would generate 500 patrons, or more than twenty per store.

Design Implications
It is clear that the capacity of the catalytic building and its use can have varying effects on the surrounding commercial area. Buildings that discharge potential shoppers in small increments more than once a day have the potential to be more catalytic than one larger venue that discharges just one crowd—particularly if it is only on certain days of the week or month.
Catalytic effect could also be created by a grid of smaller catalysts within a larger framework of shopping and dining places. By strategic placement, these smaller catalysts might be more effective than one larger one, because more shops can exist within a grid, and staggered crowds could generate a more sustained pedestrian flow.

Designers’ Role
Many influences affect the decision to build a catalytic building. However conceived, Sternberg believes that urban planners and designers can advocate including catalytic features during the design phase, increasing the likelihood that if it’s built, shoppers will come.

Sternberg, Ernest. 2002. What makes buildings catalytic? How cultural facilities can be designed to spur surrounding development. Journal of Architectural and Planning Research, vol. 19 no. 1 (Spring), pp. 30–43.