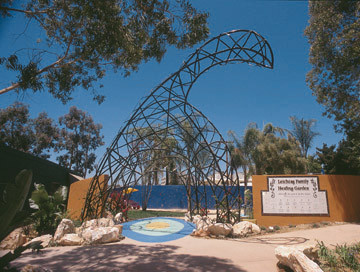 Gardens that relax and heal have become a way of creating quality environments in medical settings. But the details of exactly what works and what doesn’t work have sometimes been lost in the overall concept.

“Mood changes were attributed to combinations of the garden’s features, such as being outdoors in an enclosed natural space, hearing the sounds of running water, seeing the trees, plants, and flowers, and enjoying the colors and artwork.”1

Garden Description
The garden, designed by the firm Delaney, Cochran and Castillo Inc., has striking colors and children-friendly features. The entrance is a large wire sculpture of Sam the dinosaur, eventually to be covered by bougainvillea.

Inside, colorful walls with animal cut-outs and ceramic figures, a seahorse fountain, a windmill, perennials, and cart and starfish seating provide excitement. Canopies over a few benches and palm trees provide some shade. Two islands of grass in the midst of colored concrete and beach-like fine crushed gravel complete the presentation of the beach scene. Additional pictures of the garden with commentary can be found in an on-line article by Gordon Taylor and Guy Cooper. 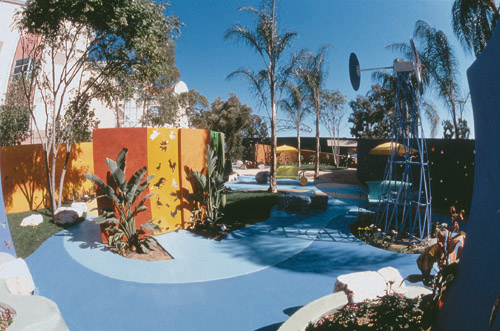 Research Methods
During a Post-Occupancy Evaluation (POE), the researchers watched visitors use the garden. They also handed out surveys and interviewed people in the hospital (users and non-users) about the garden. The observations and surveying took place in July because the researchers thought that that time of year would encourage garden visits.

Garden Use
In observing garden behavior, researchers found most garden visitors (about 50%) stayed less than five minutes in the garden, and around 40% stayed for five to fifteen minutes. Most visitors were part of a family group (60%). Staff was the second highest user group. The types of users were diverse—parents, staff, families, healthy children and more fragile children. Parents would often sit, chat, or relax while their children explored. Younger children strongly favored active play. Adults entering the garden on their own often sat on the provided benches or wandered to look at the garden features.

Increased Positive Mood
When researchers asked users about why they visited the garden, the most frequently reported reason was relaxation (28%), followed by the desire to escape a stressful environment (24%), to enjoy the garden (18%), and to increase the visitors’ ability to cope (8%). Twelve percent of the users said they passed the garden on the way to work, but did not “use” it. Over half the users reported feeling less stressed after being in the garden, while another 24% expressing feeling either refreshed, stronger, more positive, or better. About 10% reported no difference in mood after a garden visit. Some people reported having an improved ability to think and find answers (6%), or being more connected in a spiritual way (6%).

Barriers to Use
Interviews with inpatient and outpatient children suggested that they would enjoy the garden, but few knew about it. Of those surveyed, 48% of the families and 80% of the patients did not know about the garden, and 95% of families had never visited it. Signs describing the garden were posted in the main lobby of the hospital, but the researchers fielded questions from those interviewed asking who the garden was for, and who could use it. Interviews with staff suggested that their time was focused on other care priorities instead of encouraging garden use.

Suggestions for Change
The garden users mentioned what they liked about the garden and had suggestions for changes (see graphs 1 and 2). Although the fountain, bright colors, and artwork received praise, some of the suggestions for improvements were due to the diversity of visitors.

Young children and parents wanted more active things for children to do, but adults and staff wanted more vegetation and more private space—perhaps to increase the garden’s suitability for private meditation and enjoyment, and as a place of solace. Stressed parents and patients need more accessible information about the garden and its uses, and encouragement from the staff to visit.

In the commentary included in her book, Clare Cooper Marcus also remarks on the desire for more shade and larger lawn areas, and the unintended consequences of some garden features, such as a windmill that lacks vitality when the wind is not moving it. With continued critical examinations of healing gardens like this one, hospitals can reliably create quality healing environments, indoors and out.